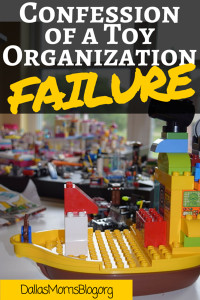 I adore instructional articles on how to keep my home nice and neat. They tell me to purge the toys, find everything a home, and label bins. Organization makes the world a better place, they tout. People like Denaye, who wrote this wonderful piece on toy organization, are my heroes!

I have four children. Count ’em: four. Three boys, one girl, between the ages of four and eight. We have Barbies and super heroes and trucks and cars and trains and costumes and Legos (and more Legos) and American Girl dolls and their clothes and airplanes and animals and educational toys. . . overflowing from our playroom.

No child needs as many toys as mine have. I just don’t know how to effectively minimize.

When it comes to toy-downsizing, it’s a whole lot easier to take away toys before age four. I’ve missed my window. Now they know exactly what they have. They may not know where it is (that’s what I waste brain cells tracking) but they can recall every stuffed animal and Barbie by name and outfit. And the Legos. Ugh! They somehow catalog those by set number, too.

Yes, I am fearful my children are developing a stuff addiction. No, I don’t want them to grow up to be spoiled brats with a sense of entitlement, but, sometimes stuff just accumulates for no reason other than simple math.

Let’s look at a typical Christmas. If you take four children and multiply that times three gifts each (that’s reasonable, right?) and then take that times three sets of grandparents you are at 36 gifts. Add in a few random presents from aunts, friends and kind neighbors and you are up to forty without thinking. Forty brand new toys headed straight to my playroom on the evening of December 25th. (And, that’s only if I’m able to restrict the grandparents to three gifts each. Doing this takes Herculean effort.)

That’s just Christmas. Then you add in birthdays. (Get out your calculator.) They each have one of those annually. Again, multiply times three sets of grandparents, sprinkle in gifts from other, random and well-meaning gift-givers and you are up to twelve, easy. Then, God forbid, you have a party where you tell people not to bring presents and they still do…And, boom! You’ve added like a thousand more toys. Throw in some “We’ve Missed You!” gifts a few times a year from grandparents that live a thousand miles away, and that’s like a billion toys added every. single. year.

This also means that these are a bazillion new toys. Not toys they’ve outgrown or toys they no longer are interested in. No, there are a billion toys that are less than one year old!

This billion number also assumes I don’t purchase my children a single present. All year. That worked for a while, but after my oldest turned seven he started to ask questions like, “Mom, if you love us, why don’t you buy us presents?”

I tried to reason with him. But, apparently, his love language is gifts. I head to Target to buy one more toy we don’t need. We’re up to a gazillion now.

Lest you assume I’m passive in my resistance to all of our stuff accumulation, you should know that I’ve gone to great lengths to scheme joint non-playroom toy gifts that can and will actually be shared. (Think: books, teeter totters, zoo memberships and outdoor playhouses.)

I go through their toys at least every two months and get rid of whatever I can successfully sneak out unnoticed. (I often hide items under my shirt to get them all the way to the garage, but those freaking noise-making toys give me away sometimes.)

I’ve also tried many forms of organization. We have cubbies and bins, and bins for our bins. I’ve printed pictures of the type of toy that goes in each bin and taped them onto the plastic front to help my pre-readers stay organized. Then, hours later, I come upstairs to find the bin that is clearly labeled with a picture of Matchbox cars suddenly houses all the dinosaurs. I explain that dinosaurs don’t have wheels like the car in the picture does.

They respond, “Mommy, the dinosaur family wanted to go in that bin. That’s their new cave!”

It’s hard to evict dinosaurs when children are involved.

Then there are the Legos. Ahhh. . . I could write a book on Lego organization and the methods we’ve tried to no avail. I’ve purchased everything from the expensive “actually manufactured by the Lego company” organization units to fishing tackle box organizers, to sewing kit dividers, to (more) plastic bins of every size and shape. I even got rid of most of the bigger toys, purchased IKEA tables, and glued baseplates to the top of them.

“We’ll just have a room full of Lego tables and bins to store the Legos underneath! It’ll stay so much neater,” I tell my husband as I justify my purchases. (He’s allergic to clutter so he buys it.)

But, it still doesn’t work.

I sit on the floor countless hours to sort those evil little pieces of plastic. I pick mini-figure body parts out of the masses of bricks because those little Lego people are all they care about anyway. I give lectures on keeping the heads, torsos, legs and hair separated for more fun and effective play. I rally the troops for organization.

So please, please stop sending me articles on how to get organized and instead send me real help–like maybe the crew from some new HGTV show on home organization all fired up to tackle our playroom. Perhaps with a bunch of lights and cameras set up, strangers will be able to talk my five-year-old into parting with his collection of Spiderman vehicles or convince some of the Barbies to move out of the Dream House. But, I just can’t do it.

And I no longer have the energy to try. 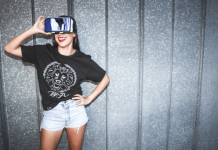 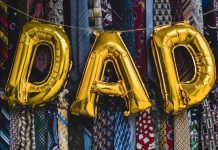 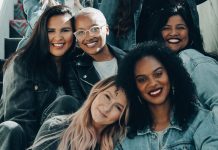