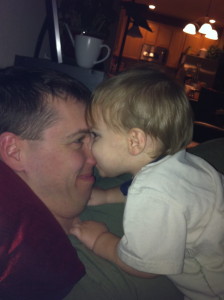 Did you know there is something you can do to make sure your children don’t drop out of high school, go to jail, get pregnant at 15, use drugs, or live in poverty?

Yes, you can pray. But, there’s something else.

Ready to be surprised?

You can help them have a good relationship with their dad.

Yes, it’s really important that children have great moms. And, if you are reading this blog, I’m guessing you probably fall into that category.

But, ladies, no matter what we do, the data overwhelmingly shows that the best predictor of child well-being is whether or not a child had a good relationship with his or her father.  Don’t believe me? Look it up.

Dads also play a bigger determinant than moms in whether or not a child will struggle with things like obesity, math, and even asthma!

I worked for an organization called the National Fatherhood Initiative for a number of years before I surrendered to motherhood.   The data on how big of a role a dad plays in a child’s life is really amazing. I recommend you check it out for yourself.

One theme that kept surfacing while I worked there was how moms could be either a barrier or a conduit to father involvement.  I don’t mean just in situations like divorce or separation — I mean even when both parents were still married and living under the same roof.

How can this be? I used to wonder. How could a mom discourage her husband from engaging his children? How could she deter him from being involved?

Then, I got married, had children, and found out.

The crux of the problem is: Dads aren’t moms.  They are dads (read: men).  And, they do things differently.

Quite frankly (don’t tell my husband this), they also do it “wrong” sometimes.

Most dads didn’t get a chance to read last month’s issue of Parents (i.e. Moms) magazine.  Accordingly, they do dangerous stuff, like letting your baby sip from a plastic cup that’s not BPA free (can you spell  t-o-x-i-n-s?).  They tackle and toss toddlers. (Does our insurance cover it if he’s dropped on his head?) They allow a preschooler to hold their hammers and screwdrivers (potential for injury is endless) or play with a ball in the driveway (Hello? Where’s it going to roll? Into the street…This can’t be good).  They let them stand in the bathtub (Slip and fall accidents kill dozens annually) and, even worse, they think it’s okay that they sometimes skip bath altogether (How are the germs going to get off without a scrub down? Oh and you’re messing up our bedtime routine…).

When all of these atrocities happen, we moms have a choice.  We can either scream at the top of our lungs some variation of, “YOU AREN’T DOING IT RIGHT!” Thus, discouraging dads from interacting with their children.  Or, we can bite our tongues and let them play and parent their own way.  We can be appreciative of the fact that we have a guy who wants to spend time with his kids. 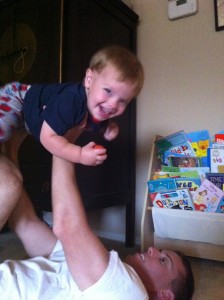 When our oldest son was just barely one, my husband reminded me of something important.

He was tossing our little guy up in the air.  The child wasn’t even walking yet and it seemed my husband was tossing him pretty high.  I was concerned he’d throw him right into the ceiling fan and was frantically trying to remember data I had read about spinal development and injuries, internally debating whether or not his body was ready to handle the battle against gravity.  So, I did it.  I issued my warning, “BE CAREFUL!”  (Had I been able to remember the spinal development stats I would have included them as back-up ammo for my words of caution.)

At that point he stopped, looked at me, and asked me a question that still rings in my ears every time I want to issue a similar admonition.

“Do you really think that I don’t care about this child as much as you do? Do you think I would ever want to hurt him? I am just as committed to making sure he stays safe and healthy as you are.”

Hmmm. That’s right. I temporarily forgot that the little bouncy boy was also his child. He loves him too.

Moms, we have to remember to let dads be dads.  From more physical play and risk-taking, to the occasional bending of the rules (15 minutes late for naptime – I guess that won’t make the earth stand still) and dressing them in clothes that don’t always match, our children need these guys for healthy growth and development.

What do you think?

Want to win a t-shirt for a great dad?  If so, tell us how your husband likes to bond with his kids.  The National Fatherhood Initiative will pick their favorites and award a couple dads with a cool new shirt.  Be sure to check out “National Fatherhood Initiative” on Facebook too, press like and then share with your man so you both get great tips on keeping him involved. 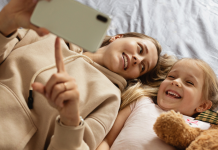 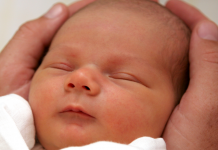 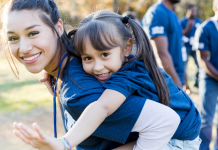