There’s something about this time of year that makes me want to curl up with a blankie, sip a hot toddy, and binge watch a great Netflix show on the couch while my kids pretend to go to sleep while repeatedly asking me for another sip of water/another kiss goodnight.

If you’re anything like me and love binge watching while your husband half works/half watches next to you, you might be in need of a new show to watch!  So here are my top 10 favorites on Netflix right now.

Mindhunter — Cool drama about the FBI and the start of criminal profiling.  Lots of cussing and some disturbing content.  But super fascinating and true-ish stories about criminals and criminal psychology in the late 70s.  The first episode was a bit of a chore to get through.  But this is one series you’ll be staying up until 2 to keep watching.  It’s that good. 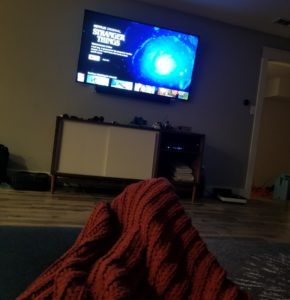 Stranger Things — Suspenseful, sci-fi, a little scary, but also an adorable story about pre-teen friends searching for their friend who goes missing.  Set in the 80s, so all it’s got all the music and nostalgia us 30somethings love.  Plus Winona Ryder is amazing in it!

Black Mirror — Think modern day Twilight Zone.  Each episode stands alone, so you can watch in any order.  It’s set in the not-too-distant future, and all technology based.  The episodes are almost warnings against our dependency on the black mirrors we spend hours staring at every day.  (Hint, turn your phone off and look at it – black mirror.)  Pro tip – avoid episode 1 from season 1.  A little more disturbing than cool, in my opinion.  The rest are really good though.

Ozark — Intense drug drama a-la Breaking Bad.  But with Jason Bateman, who I adore.  Get ready to bite your nails and sit on the edge of your couch!

The OA — Another sci-fi drama, told in flash-backs by a blind woman who has been missing for years, but returns with the ability to see.  Moving and beautiful, my husband and I both cried at the end.  We also may or may not be able to do the “movements” on command if asked.

Glow — Gorgeous Ladies of Wrestling.  I grew up watching wrestling shows with my dad, so I absolutely loved watching this dramedy, set in the 80s, about the start of woman’s wrestling.  The outfits!  The hair!  The fighting!  So much to love.

Unbreakable Kimmy Schmidt — From the genius of Tina Fey, this comedy about a woman trying to adjust to life after escaping from a bunker she was forced to stay in for 15 years, will keep you laughing episode after episode.  Kimmy’s positive attitude, Tina Fey’s multiple characters, Titus Andromedon (her new roommate) – all of it is quick, clever and hilarious!

Travelers — You might be able to tell by this list, but I really like sci-fi.  Travelers is a cool time travel show where the “travelers” time travel by sending their consciousness back to bodies of people about to die.  The concept is cool and different, and it totally sucked me in for the entire first season.  Eagerly awaiting season 2!

The 100 — Another, wait for it, sci-fi.  This one is 2 parts teen drama, 1 part bad acting, 1 part cool premise and all parts – I can’t stop watching.  It took me 2 episodes to get into, so give it a minute.  But there’s 4 seasons to binge and cringe and escape with.  Set in the future where humanity has been orbiting earth for hundreds of years, 100 teen criminals are sent to earth to see if it is finally habitable.  Fighting, power struggles, Grounders, cool female leads.  I just started season 2 and I can’t look away!

And one to grow on that I just started – iZombie.  I’m a sucker for all things zombie related – and this Veronica Mars meets Zombieland is just fun and silly and addictive.  Tip though, don’t watch before bedtime unless you want weird zombie dreams!

Those are all my favorites on Netflix right now.  But I want to hear yours!  What should I binge watch next this holiday season?

Sorry, Not Sorry :: 5 Things I won’t Apologize for Anymore!